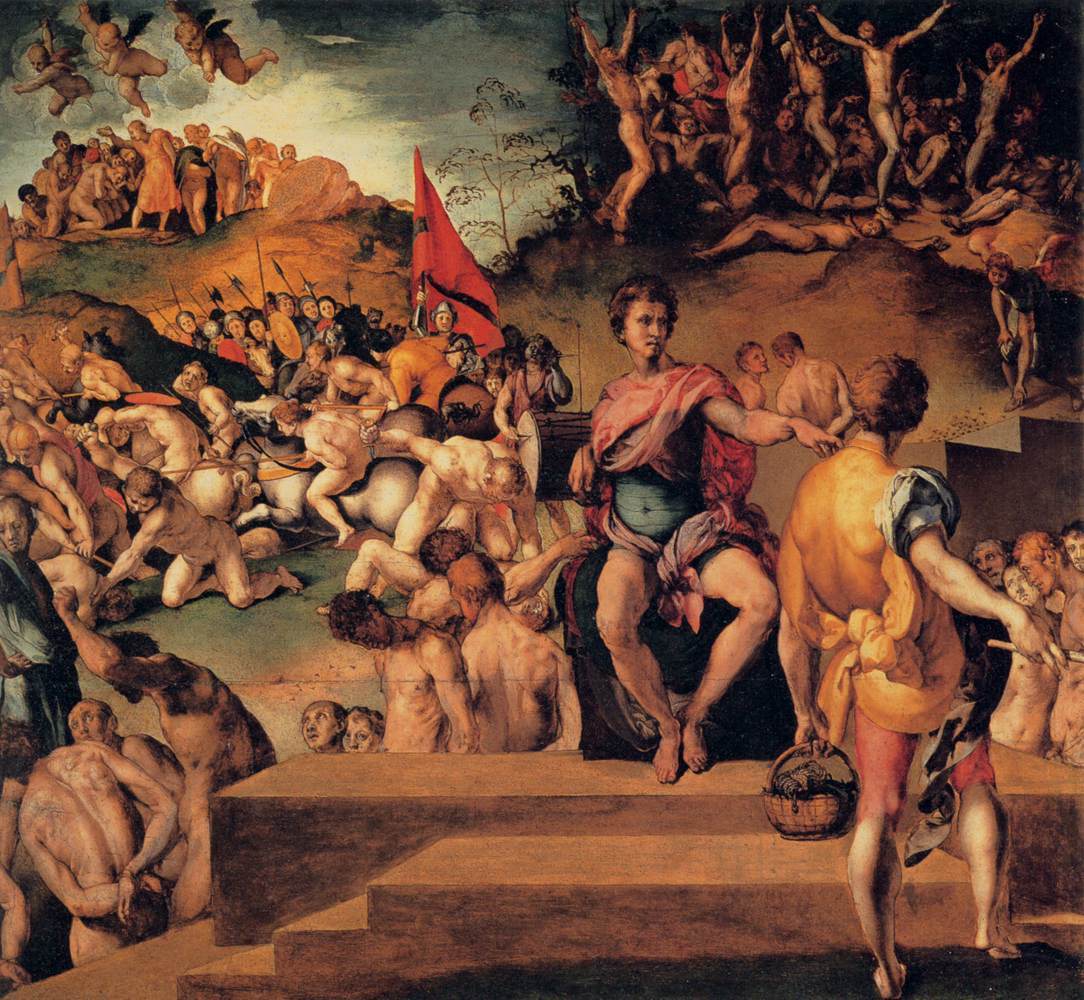 In 1545, an artist named Jacopo da Pontormo was chosen to create a fresco for the church of San Lorenzo in Florence by Duke Cosimo I de'Medici. He cloistered himself in his chapel, closing it off with partitions and curtains so nobody could witness the creation of his masterpiece or steal his ideas.

He would outdo Michaelangelo himself. When some young men broke into the chapel out of curiousity, Jacopo sealed it off even further.

Jacopo filled the chapel's ceiling with biblical scenes -- the Creation, Adam and Eve, Noah's ark, on and on. At the top of the middle wall he painted Christ in his majesty, raising the dead on Judgment Day. The artist worked on the chapel for eleven years, rarely leaving it, since he had developed a phobia for human contact and was afraid his ideas would be stolen.

Pontormo died before completing the frescoes, and none of them survived. But the great Rennaisance writer Vasari, a friend of Pontormo's who saw the frescoes shortly after the artist's death, left a description of what they looked like. There was a total lack of proportion. Scenes bumped against scenes, figures in one story being juxtaposed with those in another, in maddening numbers. Pontormo had become obsessed with detail but had lost any sense of the overall composition. Vasari left off his description of the frescoes by writing that if he continued, "I think I would go mad and become entangled in this painting, just as I believe that in eleven years of time Jacopo spent on it, he entangled himself and anyone else who saw it." Instead of crowning Pontormo's career, the work became his undoing.

The frescoes were visual equivalents of the effects of isolation on the human mind: a loss of proportion, an obsession with detail combined with an inability to see the larger picture, a kind of extravagant ugliness that no longer communicates... Artists who hole themselves up in their fortress lose a sense of proportion, their work communicating only to their small circle. Such art remains cornered and powerless.

One's fear of failure, judgment, or just mistrust of others will often be the very thing that buries a project. That's why you've always got to be shipping.