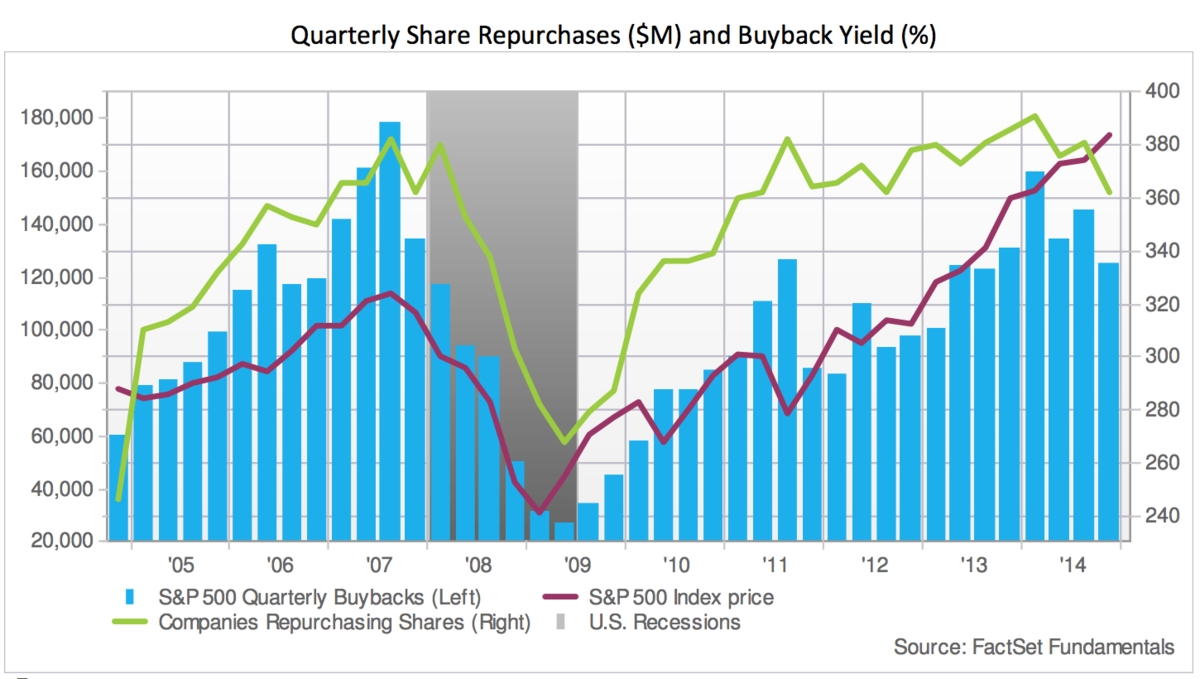 Stock buybacks are the biggest force influencing equities since 2009 — over $2 trillion have been done.

Some are probably good, but many aren't. In 2011, Warren Buffet wrote about how you can tell: (via Seeking Alpha blogger Chuck Carnevale)

Charlie and I favor repurchases when two conditions are met: first, a company has ample funds to take care of the operational and liquidity needs of its business; second, its stock is selling at a material discount to the company's intrinsic business value, conservatively calculated.

Clearly a lot of buybacks fail the 2nd criteria — but there are so many boards and management teams that are compensated by EPS that the share buybacks keep happening even when the price is not a discount. A natural result when incentive structures meet personal self-interest. One blogger points out, it's actually a form of managers looting their companies.

It's a claim echoed by the Atlantic in February of this year in an article called "Stock Buybacks Are Killing the American Economy." Rather than new jobs, new factories, new products, it's straight back into the financial system.
Since the companies themselves have no specific better ideas about how to use the capital to grow in real terms (e.g. real new products that drive real new revenue) all their professional managers can do is buy shares back regardless of price. In this world, buybacks are directly related to Thiel's ideas around indeterminate optimism of the markets, where companies are encouraged to be as profitable as possible.
Who cares if you're buying back at a ridiculous price? We don't know what to do with the cash anyway.

This is interesting because a traditional criticism of whether we're in a bubble is whether P/E ratios are high or low. The E part is Earnings Per Share, and so if managers manipulate the denominator for both P/E and EPS, they can make it seem like things are fine (and get their quarterly bonus to boot!) when functionally there's little happening.
On the bright side, the lack of innovation in traditional incumbent businesses means that startups have a chance in more arenas than ever. If big companies have management that won't take the risk of failure, and aren't hiring teams to attack new markets, then it's wide open for new players to get capital, hire people, and make these things happen.
If buybacks are killing the economy, then startups will save it. Pretty sweet if you ask me.
—
Chart via Factset
More reading here: ValueWalk