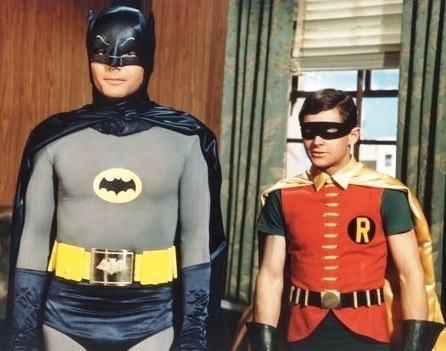 This had me just rolling with laughter. I saw this on franjie's posterous and just had to repost. What a bygone age it was on television when you could get away with totally awesome campy lines like this! Robin: "You can't get away from Batman that easy!"
Batman: "Easily."
Robin: "Easily."
Batman: "Good grammar is essential, Robin."
Robin: "Thank you."
Batman: "You're welcome." Batman: "Haven't you noticed how we always escape the vicious ensnarements of our enemies?"
Robin: "Yeah, because we're smarter than they are!"
Batman: "I like to think it's because our hearts are pure." Robin: "I guess you can never trust a woman."
Batman: "You've made a hasty generalization, Robin. It's a bad habit to get into." Robin: "That's an impossible shot, Batman."
Batman: "That's a negative attitude, Robin." Robin: "Where'd you get a live fish, Batman?"
Batman: "The true crimefighter always carries everything he needs in his utility belt, Robin." Batman: "The green button will turn the car a la escarda o a la drecia."
Robin: "To the left or right. Threw in a little Spanish on me, huh, Batman?"
Batman: "One should always keep abreast of foreign tongues, Robin." Robin: "We better hurry, Batman."
Batman: "Not too fast, Robin. In good bat-climbing as in good driving one must never sacrifice safety for speed."
Robin: "Right again, Batman." Robin: "I am a little hungry."
Batman: "Of course, Robin. Even crime-fighters must eat. And especially you. You're a growing boy and you need your nutrition." Batman: "Ma Parker's girl is more dangerous than her three boys."
Robin: "Her legs sort of reminded me of Catwoman's."
Batman: "You're growing up, Robin. Remember, in crime-fighting always keep your sights raised." Batman (about to cross the street): "Remember Robin, always look both ways." And a personal favorite for dishing some Batman wisdom on economics...
Robin: "Gosh, Economics is sure a dull subject."
Bruce: "Oh, you must be jesting, Dick. Economics dull? The glamour, the romance of commerce... Hmm. It's the very lifeblood of our country's society." Many thanks to franjie for the hilarious post.