New vlog this morning! Transcript below:

What do you do when someone steals your idea? First off, yes, it does happen. It's so hard to get a good idea that sometimes it's easier for people to just look at what's already working, and then rip it off.

Richard Hendricks: Middle Out is based on a completely new and probabilistic model. I'm sorry, is this too in the weeds?

VC #2: How does that even work? I mean, you can't compress something that's already compressed entropy, right?

Richard: Wow, I don't really get too many of those questions in meetings like these, but it's actually easier if I show you. May I?

Jared Dunn: They definitely are.

Erlich: Those guys are never going to fund us. We need to leave now.

Richard: What are you talking about? This is going great.

Erlich: Of course they're interested, because they want to steal it. This is a classic brain rape.

So that's a really extreme example, and that's really not what you should expect from coming to Silicon Valley, but it does happen, and there's a real reason why.

Good ideas that will actually work are very, very rare, and they come about for just a few reasons. One, technological, two, regulatory, or three, some sort of macroeconomic force that's happening.

First is technological change. Just imagine what it took to create the first iPhone. It took battery tech, it took display tech, it took miniaturization, it took software that could actually be efficient enough to use far less memory. It was almost a perfect storm that needed to come together to make the iPhone.

A more recent example that we're seeing in our portfolio right now is the cashierless checkout process of Standard Cognition. They're able to do what Amazon Go did, but with no shelf sensors, and that's a really powerful thing, because if you can do it just with cameras, you can bring down the cost of deploying cashierless checkout by 10 to 100 times. That's powerful.

When these things finally come together, they actually unlock entirely new platforms. Before Instagram could happen, you needed the iPhone.

That's the crazy thing about technology. These platforms are continually stacking, and so what wasn't possible before, suddenly becomes possible by the startups, the products and services that happen before it.

Another really common way something is not possible and suddenly possible is regulation. One thing that's happening before our very eyes right now is the adoption of telemedicine. It actually took the FDA to put out a letter saying you can have a doctor in the loop driven by software, through your smartphone or through your web browser. "It's okay to do this now."

When regulation hits, suddenly there's a wave of activity, because here's a thing that you couldn't do that suddenly you now can do.

Finally, macroeconomic forces are sort of pushing people around in our modern society all of the time.

One good example of this is remote work. It's housing, right here in San Francisco, causing the cost of living to go up so much that it becomes nearly impossible to keep and retain software engineers.

These are forces that are way bigger than any individual one of us, or any given company, but they're so big that they enable entirely new markets. And this is why answering the why now question is so fundamental for anyone who wants to start something new.

If startups that can actually work are limited by these very specific things, then of course you're going to have people who fast follow, who might actually just figure out that idea independently of you, so as a result, the idea is only a multiplier on execution. The ideas are out there, everyone can sort of pursue them.

The thing that will actually distinguish you from all of the other people who are trying to do it, at the end of the day, will be your execution.

What's your product like? Is it actually what people need? And do people choose you over all possible alternatives?

That's the one inescapable fact. A lot of people when confronted with the scary idea of having a lot of competition, or people wholesale stealing their idea, they freeze. They get scared, they stop sharing that idea, and the reality is, that's almost the exact opposite of what you need to do. When you have a lot of competition, often you have to lean even more heavily into that. You actually have to be so deeply associated with that problem space, and being the best solution for that problem, that you win.

It's easily one of the most counterintuitive facts when it comes to how to bring ideas to life in startup land.

The reality of any great idea is a great idea on its own will not be enough. In order to actually take advantage of it, you're going to have to jam it down their throats. It's going to be a lot of manual work and it's just pure execution.

But the upside is, if you execute faster, you go to market faster, you're innovating and running out ahead of everyone else, then even the people who are trying to copy you can only copy the version of you from six or nine months ago.

That's what it takes. You can beat the copycats, but you've got to outrun them. 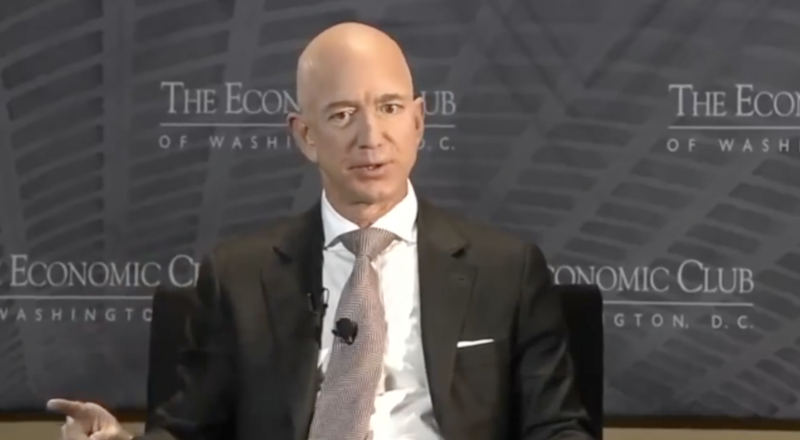 Jeff Bezos on competition— The number one thing that has made us successful by far is obsessive compulsive focus on the customer as opposed to obsession over the competitor. And I talk so often to other CEOs, founders and entrepreneurs and I can tell even though they are talking about customers, they're really focusing on competitors.