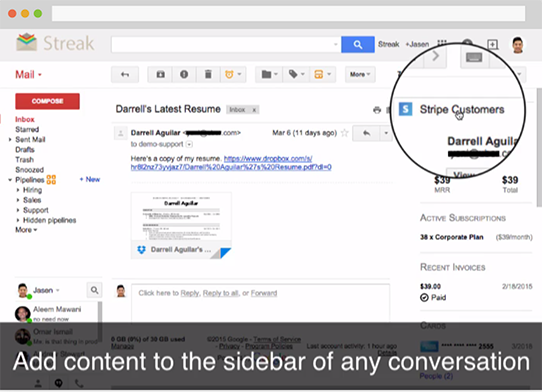 The Facebook API. iOS. I remember when their API docs hit the scene, and what a greenfield opportunity it was. Today, the opportunity for Gmail apps is much bigger than when those greenfield APIs were released. There are over 1 billion daily active uniques on Gmail now, and it’s a fundamental pillar of how people communicate today. But until today, it was cumbersome and nearly impossible to consistently write an app that had a good user experience that worked as well as being a part of Gmail itself.

InboxSDK, released today by YC-backed startup Streak CRM, is that solution. It provides the missing things that would be extremely cumbersome to do with Gmail’s backend APIs alone. Lots of companies like Dropbox, Stripe, Screenleap, and Streak CRM themselves actually use InboxSDK right now in production.

An incredible amount of work was put in to make InboxSDK possible. A Gmail API is a monumental task — just look at all the possible interactions, with multiple inboxes, chat, preview panes, conversations, different Gmail Labs features, and many kinds of email compose windows.

As with any brand new opportunity, we don't know all the amazing things people will build yet. But this is a rare opportunity for hackers and founders to think about ways to make awesome stuff that works on top of email. A billion users are going to be in for a treat this year.