Posts tagged with
via bitrebels.com

Cynics will roll their eyes, but there are some really interesting stats in this video.

Is Social media in 2009 = Multimedia in 1993? CD-ROM's were big and new then. Siliwood, or multimedia gulch, they called San Francisco. People were going nuts about interactive video. There was real tech behind it. There were cool new user scenarios and experiences unlocked before our eyes. Interact with a movie? Tell stories in a whole new way? It was a veritable boom.

We don't talk about multimedia anymore -- but maybe that's because the boom fulfilled its promise. Here's hoping social media can overcome its hype curve as well. And we're on the front lines. Damn, it's an exciting time to be alive.

I recently had a problem with Kodak Gallery. I made the mistake of using them for some photos about six or seven years ago, when I didn't know any better. Someone at Kodak has decided to make a buck off of this mistake, and the mistake of hundreds of thousands of other poor souls who also became Kodak Gallery users. They said they would delete our photos if we didn't buy a bunch of stuff. I spent a couple hours writing a simple ruby script that let people download their full Kodak galleries without resorting to paying exorbitant fees to get an Archive CD. Or in the case of one user, NINETY archive CD's. Here's the comment I received earlier from a Kodak Gallery user named Deepak Jain this evening that blew me away:

I've been using Kodakgallery since 2003 (when there weren't many options and I figured Kodak was a good enough name to stay around). I didn't even mind buying stuff form them until photographs became passe.

I even tried to buy their Archive CD except their system can't process > 40,000 images via Archive CD.

They keep canceling my order without comment. [ed: emphasis mine]

Works like a champ. Send me an address and I'll send you some beer or money or something.

It's one thing to charge, and it's another thing to charge a user $700. But to not even be able to process that order is incompetent and absurd. To be honest, I made the same mistake. I thought Kodak was a good enough brand. Evidently good enough to eat 70 gigabytes of cherished photos and require an open source ruby script to extricate it. Deepak, I'm glad the script ended up being useful for you. User generated content sites of any kind should heed this rule: Let users download their data. Making a buck is fine, and in fact necessary. But when you're dealing with people's memories, do not hold them hostage. 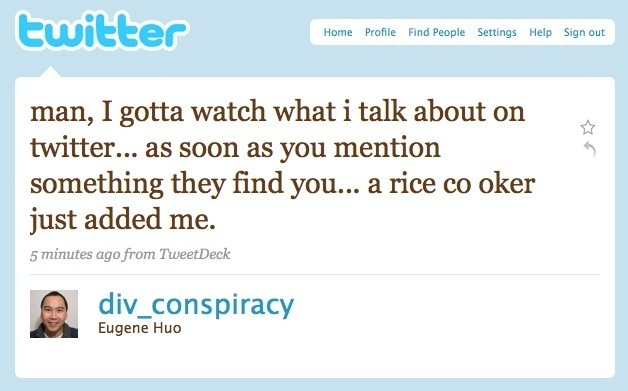 Social media invites make me laugh. Here's one I got just this morning from bebo.com

When I asked my friend if she actually sent it, she was embarrassed as heck. No, she said. She did not write "You will like it." Of course the phrase "Click to find out why" really tipped me off to how fake these invite messages actually are. Are you kidding? I know nobody except a bebo.com engineer would write something so incredibly lame. Call to actions are great, but if you're going to impersonate someone with text (the from line was sent from my friend's email address, not from bebo.com), at least make it a plausible lie.

Was hanging out with my friend Dave Zohrob yesterday and he was mentioning how the most successful social media takes its cues essentially from two places: 1) video games (which is awesome) and 2) spammers (which is just straight up evil). I think the moral question for these sites is: At what cost viral?