Branch cofounder Josh Miller's recent post about how his 15 year old sister uses the Internet blew me away with its observations the other week. I'm 31, so young enough to remember what it was like to be young, but old enough to be out of touch with the youngest millenials and those even younger. To be honest, it's a sobering notion that there's some piece of technology out there that you and your peer group doesn't use and doesn't understand. As far as I can tell, it might be a first for me and my geezer friends.

I kept turning it over in my head. I wanted to understand this phenomenon -- if I didn't have an intuitive sense, then I wanted to at least get more data.

That's where YC startup Survata came in. With their help, I surveyed 1,038 people in two groups -- those aged 13-18 (546 responses) and 19-25 (492 responses) and asked which services they used regularly (defined by several hours per week or more, multiple answers OK). 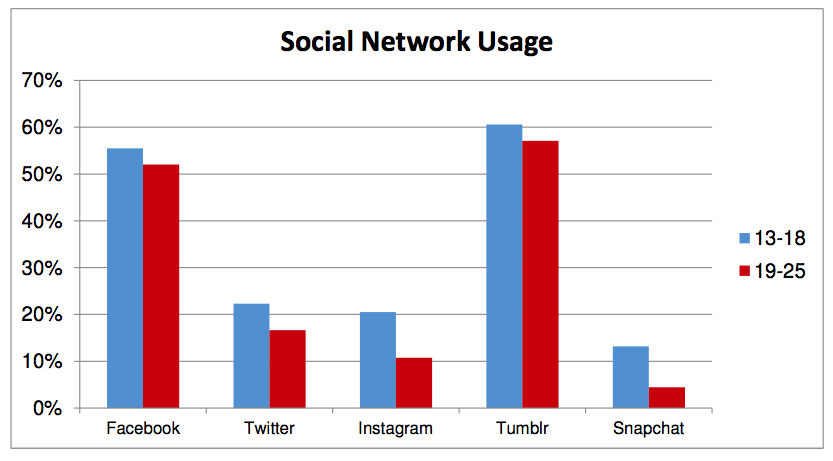 And the raw numbers: 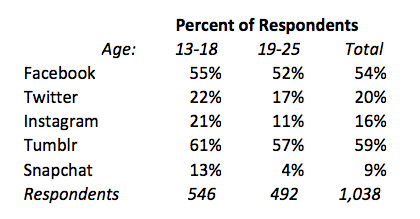 This confirms Josh's observation that there is some significant usage among the younger generation -- particularly among high-school age teenagers. Whether they continue to use it as they mature, get email addresses, and enter the workforce will be an interesting thing to watch.

It turns out Facebook's doing just fine with the kids these days -- in fact, slightly more of the younger demographic reported using it regularly. But perhaps most impressive was Tumblr topping the list at #1, with 59% of respondents saying they used it regularly.

Survata showed my question as a content survey-wall to people throughout the United States -- respondents were slightly female skewed (60% vs. 40% dudes) -- and they appeared on blogs and content providers like Hyperink. I was impressed with how the data came back just overnight, and how it ended up costing so little to get such useful data.

Perhaps the most heartening observation from the Snapchat/Instagram phenomenon is that new social behaviors can and will happen. For a time the door may have seemed closed. Yet Flickr sprung out of nowhere in 2002 when nobody else believed in consumer web. Ten years later, it might be deja vu all over again.

If you're curious like I am and are wondering about how people think or use anything, run your own Survata and share the results -- real data from real people is like dietary fiber -- we need more of it, and more often.